Shortly after moving into my current home in 2013, I discovered a little family of stray cats living down the road. So I started feeding them in the car park of a recently abandoned warehouse a few doors down. Once I got them into a feeding routine, I started the TNR (Trap, Neuter, Return) process.

Over the following months I very slowly started to gain their trust and develop relationships with them. I gave them names – Momo and Trees, the sisters, and Dads, their father.

Momo was the first cat to decide I wasn’t so bad. While she wasn’t comfortable with me touching or patting her, after a few short weeks she had taken to following me around while chirruping away, and camping out on my veranda to watch me through the window. But she always stopped short of actually following me into the house. Of course I tried to coax her in, but she was too scared of my cats.

A few months later, after Momo, Trees and Dads had been desexed, Grey Cat turned up. It took me a couple of months to manage to trap him for desexing, as initially I only saw him very sporadically. During this time he was very aggressive with other cats, and would hiss and spit at me, and I was extremely worried that Grey Cat was going to seriously hurt one of the other cats. One night I heard an all-mighty scream, and both myself and my neighbour ran out to see Grey Cat body-slamming Momo on the footpath. As I ran towards the fight, Grey Cat took off, and thankfully Momo wasn’t physically injured. After witnessing this close call, my lovely neighbour made a decision then and there to adopt Momo. I had her trapped within the next 20 minutes, and set her up in a holding cage in my neighbour’s house to help her acclimatise to being an indoor kitty. It did take another few months for her to get used to her new life, but these days Momo is just like any other pet cat, and she’s loving it. She spends her days finding the sunny spots in the house, and at night she cuddles up in bed with her new human mum and dad. They can even leave their front door open, and Momo won’t leave. I guess she knows she’s not missing anything terribly great outside having lived it.

These same neighbours also adopted Momo’s sister Trees later on too. Trees will always be a much more timid cat than Momo. But she too eventually settled into the comfortable life of an indoor pet cat. Her human family don’t mind that she’s a timid cat, and doesn’t like too much affection. They love her just the way she is, and are happy that she’s happy and safe.

I did eventually manage to trap Grey Cat to get him desexed. Over the following weeks, as his testosterone levels dropped, he became less and less aggressive to the other cats, and stopped hissing and spitting at me. These days he’s a very sweet cat who loves a head scratch. 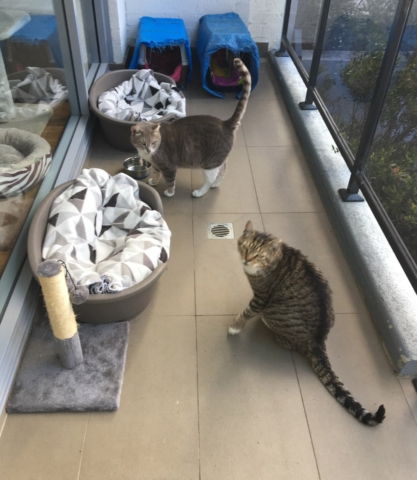 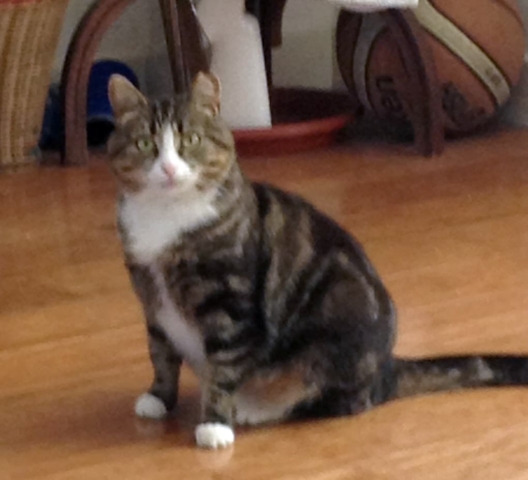 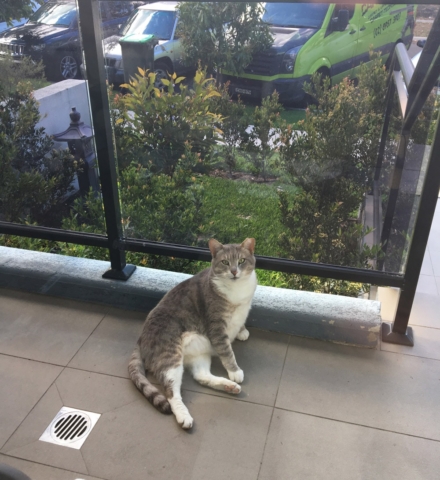 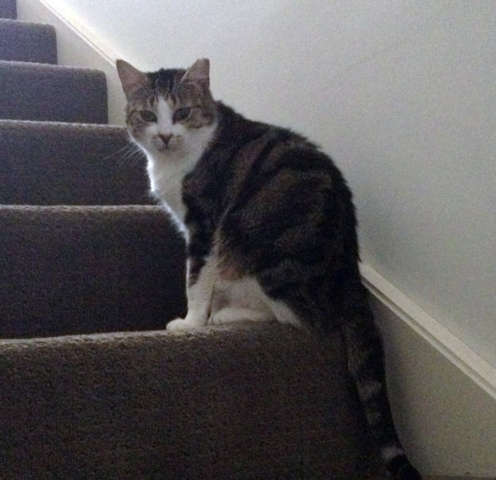 Around the same time that I was trying to trap Grey Cat, I relocated the feeding spot from the abandoned warehouse to my veranda, as the warehouse was slated for demolition. Once I started feeding them on my veranda, Dads began sleeping on my veranda. So I bought a couple of plastic cat outdoor beds, and placed soft beds covered with polar fleece blankets inside the plastic beds. Dads quickly claimed his favourite bed, so Grey Cat got the other bed.

Dads and Grey cat had been sleeping on my veranda for a while when we had a torrential downpour very late one night while I was sleeping. Rather than going back to the warehouse for shelter as I’d expected, they remained on the veranda and got soaked. I woke up in the morning to find poor Grey Cat perched on top of the electricity box looking absolutely miserable and bedraggled, trying to avoid as much rain as possible, but it was coming in sideways, and it wasn’t helping him much. Dads was huddled in the far back corner of the veranda and was even more soaked and miserable looking than Grey Cat. So I grabbed a couple of front-opening carry boxes from my garage, removed the doors, covered them in a tarpaulin, lined them with polar fleece blankets, and put them on my front veranda, for the cats to use as bad weather beds. Both cats immediately went into a box each. So now they have their good and bad weather beds to choose from.

These days, both boys can’t get enough pats and affection from me. They especially loooove being brushed. They are also now great mates with each other, and rarely leave my veranda. Why would they? They have their choice of beds, a scratching post, fresh water daily, a waiter (that’d be me) who brings them breakfast and dinner (and sometimes second dinner if they can make me feel guilty enough with the staring at me like I’m starving them), and lots of pats and attention, not just from me, but from the neighbours and passers-by who regularly stop to admire the cats and to give them a head scratch.

Why am I telling this story? Well, it’s because I hope that people reading this who have their own local stray cats will consider doing the same. As the reality is that there are far too few rescue groups for the number of cats in need. And even if there were unlimited places for stray cats with rescue groups, for cats like Dads and Grey Cat, they would not be happy at all if they were moved away from the only environment they have ever known. They are not indoor pet cats. They are street cats. I’ve just given them all the comforts of being a pet cat, yet allowing them to remain street cats. While Momo & Trees were able to fit into life as indoor pet cats, they were much younger than Dads and Grey Cat.

My story is not unique. People all over the world having been caring for stray cats for thousands of years. You don’t need to have any special skills or knowledge, just willingness. I understand a lot of people in this position worry about what would happen to the cats if they have to move. I worry about that too, but not too much, as if/when I have to move I will worry about it when the time comes.

Not every cat will necessarily end up this friendly (although most will over time), and you do need to bear in mind the area you live in as to whether or not cats can live safely as outdoor cats on and around your property (I live in a quite dead-end street), but my story shows that not only will you make a big difference to the lives of the cats you help, but you just may find that they make a big difference to you too.

If you have your own local stray cats and would like to try and replicate this, if you are in Sydney, we can loan you a trap (you’ll need to pick and return traps either from Botany or Bass Hill) and assist you with advice. If you’d like Erica to call you, please use our Contact Us page, and make sure to include your phone number, and a brief message which will be passed onto Erica.

Our only sources of income is adoption fees and donations so we are very reliant on the community to support our work. Regular monthly donations are our stable income source that allows us to plan.