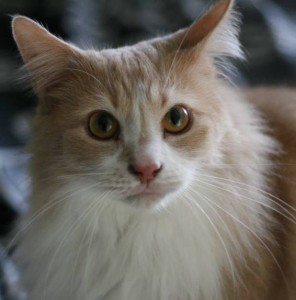 In 2010, CatRescue was contacted by the manager of an animal testing facility in Randwick, Sydney who were closing down to move off-shore. This particular facility held around 30 cats whom they were using as part of a study aimed at improving surgical techniques for vision correction in humans. Basically they were trying to develop a permanent, non-removable contact lens. While all other cats at the facility were being sold off to other testing facilities for use in further research projects, the manager had formed a bond with one particular cat who she wanted us to rescue and rehome. This cat was later named Leo.

Through intense negotiations we were eventually able to secure the release of 4 cats who all have found wonderful homes. Sadly, despite all efforts, we were not able to get them to release any more cats.

At the same time, we contacted an old rescue friend in Melbourne who was working for Humane Research Australia to see if they had any ideas on how we could make this rescue count for a whole lot more; to speak for all the cats who were couldn’t rescue. It was quickly agreed that we should send one of the cats to our friends in Melbourne to become a spokes-cat for animal testing in Australia. As it was Leo who started this all, it seemed only fitting that he was the chosen cat.

Today Leo is a local celebrity and has his own soft toy range, an illustrated book of his story, his own greeting card range, and his own Facebook page.