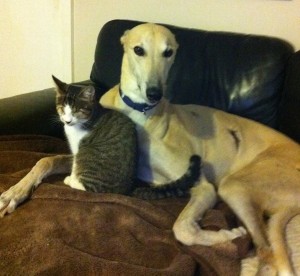 They say that love is blind, but in this case it’s really true!

Back in 2011, our carer Jo rescued a greyhound who had spent 6 months in the Animal Welfare League shelter waiting for the right person to adopt him. After lots of love and patience Fastfeet rewarded Jo and her family with his beautiful caring personality. Then Jo began caring for sick little Indi who was recovering from surgery to remove both her eyes which had been damaged by severe cat flu, and it was a match made in heaven. The two animals formed an instant bond and spent all their time together with Fastfeet caring for Indi as she recovered.

When it came time for Indi to be adopted by a new family, Jo knew Fastfeet would miss her dearly. But Fastfeet’s love for cats didn’t stop at Indi — he’s formed a bond with every foster cat who comes into Jo’s house. “He just wants to be in the room with them,” Jo says. “He sits on his blanket and the cats crawl all over him. He even grooms them. I’m starting to think he believes he’s a cat.”