There is no justification for a war on outdoor cats – feral or otherwise – based on shaky science and an absence of ethical reasoning.

In November 2014, the Federal Environment Minister, Greg Hunt announced a pledge of $2 million to protect Australia’s threatened species. Sounds fantastic, right? Unfortunately the devil is in the detail. 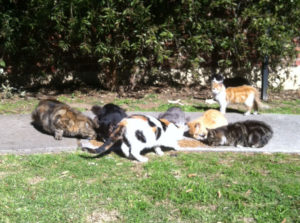 Since this announcement was made, it’s become clear that what Greg Hunt is actually talking about is what has become known as Australia’s “War on Cats”. This $2 million in funding is in fact to be used predominantly to cull 2 million feral cats by 2020.

On face value it sounds reasonable to assume that by killing 2 million feral cats that it will save much of Australia’s vulnerable wildlife. This is exactly what Greg Hunt is relying on. He’s hoping that no one will ask for any evidence or ask any questions. The premise is simple. The statement is set up to make it seem that anyone who opposes or even questions this plan cares about feral cats more than do about Australia’s native wildlife, or doesn’t care about wildlife at all.

We only need to look at what’s come before to know that this plan will fail, and will only cause individual suffering to the 2 million feral cats they plan to kill for nothing. For one example, look at the devastation caused on Macquarie Island by the cat eradication (i). Despite the fact that the feral cat cull was part of an integrated pest management strategy, which included the release of the Myxoma virus to the local rabbit population (ii), once the cats were completely eradicated, the feral rabbit population exploded, causing widespread devastation to the native vegetation, which the local seabird and penguin populations (the very animals the cat cull were meant to save) relied on for survival. It is now estimated that on Macquarie Island, the cost of further conservation action will exceed AU$24 million (ii).

The example of the unintended and devastating outcomes of the cat cull from Macquarie Island should serve as a strong reminder to us not to repeat past mistakes.

Historical lessons aside, there are a few basic problems that we start with, but are supposed to overlook to accept Greg Hunt’s plan. One is that no one knows how many feral cats there are in Australia, but most impartial scientists and academics with no vested interest state that the numbers bandied about are likely extremely over-inflated. If you ask Greg Hunt, he’ll tell you there are between 15 and 20 million feral cats in Australia (iii). However, when queried by the ABC’s Fact Check (iv), Greg Hunt’s office said the figures were sourced from The Action Plan for Australian Mammals (v) published in June 2014.

However, Fact Check contacted the authors, Professor John Woinarski from Charles Darwin University and consultant biologist Andrew Burbidge, who both say the plan provides no such statistic.

Several decades of conservation in Australia have focused on killing feral cats, foxes and other introduced species; a sufficiently long process to learn that this approach is not working. Even highly coordinated and intensive eradication programs backfire. This can happen in two ways. Killing cats, even two million of them, can inadvertently increase cat numbers by enabling more cats to immigrate into vacant territories. Conversely, cat eradication can cause population booms of other species (such as rabbits and rats) and result in further harm (vi) & (vii).

A recent study (viii) was undertaken by wildlife biologists in the forests of southern Tasmania, and shows that culling can backfire very badly. The biologists surveyed feral cats in four large areas of native forest, and then trapped and removed animals for a year in two of those areas.

Initially they caught lots of cats, and then found trap success rapidly dropped off, suggesting most of the cats had been removed. However, through monitoring using remote cameras they soon discovered that even more new cats appeared. These newcomers did not enter the traps. As a result the abundance of cats actually went up in the areas being trapped.

What seems to have happened in these cases is that young cats quickly moved in from surrounding areas to replace the dominant adults removed in the cull. Most of these young cats would normally have died due to natural selection. By allowing their survival by culling the dominant cats, thereby removing their natural competition, the sudden increase in their survival allowed abundance to overshoot pre-cull levels. (viii) 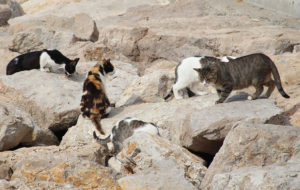 This phenomenon, also known as the “vacuum effect” (ix) is the basis for the premise of Trap-Neuter-Return, commonly referred to as TNR, and has been well known and accepted by people working closely with cat colonies for decades.

Another significant problem is that we do not know how many feral cats are already being killed annually in Australia. As feral cats are killed by a variety of different groups and individuals, from recreational shooters, to land care and wildlife protection groups, to farmers and land owners, it may be impossible to gather accurate data. However, it’s been estimated that we collectively already kill over a million feral cats annually. Yet everyone agrees that the overall numbers of feral cats in Australia are not declining. Nor however are they increasing overall. While these figures are unverifiable, it does demonstrate that further research into this area is needed before we make plans to kill a further 2 million cats if we genuinely want to see real outcomes for our vulnerable, native wildlife.

A glaring oversight in Greg Hunt’s plan is his tunnel-vision view, focusing on the feral cat cull. Scientists and academics have repeatedly stated that one of the most important factors in protecting native wildlife from feral cats is by ensuring suitable ground cover, as feral cats are far more successful when hunting in the open on cleared land. Large swathes of land in Australia are regularly cleared completely either for farming practices, or fire management, thereby leaving native ground dwelling species vulnerable to predation. It’s also strongly recommended to protect wild Dingo populations, whose presence in an area forces feral cats out.

Australian Wildlife (x) who are undertaking Australia’s largest feral cat research program in an attempt to unlock the secret to eradicating feral cats, have stated “Unfortunately, techniques such as baiting, trapping and shooting – which allow islands and fenced areas to be laboriously cleared of feral cats – are not currently effective at a landscape scale. Cats are difficult to locate and extremely wary, which makes trapping and shooting resource-intensive and impracticable. In addition, the removal of cats from one area is offset by immigration from adjacent areas. Baiting is also currently limited in effectiveness (cats do not readily take bait as they are live prey specialists; and baiting can have a significant impact on native species). Finally, the introduction of diseases (biological control) does not represent a viable option at this stage: for example, many of the diseases are already in the wild cat.” (x)

Australian Wildlife’s feral cat control strategies are:
• Protection of ground cover by controlling feral herbivores and delivering effective fire management – this limits the impact of feral cats by ensuring native animals have more cover and easier access to food.
• Protection of dingo populations because dingoes influence the behaviour of feral cats by harassing and sometimes killing them.

Many scientists and academics echo these same concerns, and there’s a large consensus that the basis for Greg Hunt’s feral cat cull, or “War on Cats” is conveniently overlooking the science and facts, and that they’ve instead found a convenient scape-goat in feral cats. I ask, if you care about our vulnerable native wildlife, don’t you want the Government to base their decisions and direct your tax payer dollars towards initiatives that will result in genuine outcomes?

I’d like to finish with a quote from William Lynn, Research Scientist in Ethics and Public Policy, from Clark University, in his address to Australia’s War on Feral Cats, who said “There is no justification for a war on outdoor cats – feral or otherwise – based on shaky science and an absence of ethical reasoning”. (xi)

There is no justification for a war on outdoor cats – feral or otherwise – based on shaky science and an absence of ethical reasoning.