If you live with a companion animal the most important thing you can do is to ensure they are desexed. Every year in Australia approximately 200,000 healthy cats/kittens and dogs/puppies are destroyed in council pounds and shelters – see animalsaustralia.org/issues/companion_animals.php.

Desexing saves innumerable lives, improves health, increases life span, and promotes positive social behaviours.  If you are experiencing financial difficulty there are many subsidised desexing programs available in Australia to help you meet these costs. See ndn.org.au for more information.

The cat numbers on the streets are so out of control now, the only way to deal with over population is to desex. Everyone can make a difference. Desexing owned cats and strays is absolutely vital. Females will have on average around 12 to 16 kittens per year. By the time mum is having her third litter for the year, her first kittens will be having their first litters. That is a dreadful amount of kittens, from just one mum, in just one year. These numbers are why desexing makes such a huge difference.

Very sadly, as the stray cat population rises and their health deteriorates due to lack of care and nutrition, we are seeing babies being born with higher rates of birth defects, causing even more suffering on the streets.

The following information presents an overview on the benefits of desexing. Click these links for more information :

It is a fact that desexing is essential for improved health: preventing infection, disease, and antisocial behaviour. Desexed cats generally live longer. 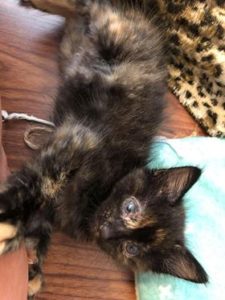 Feline Immunodeficiency Virus, also referred to as Feline AIDS, is infectious and attacks certain cells in the cat’s immune system and they can become ill.

Undesexed cats are the main transmitters of FIV which happens during fighting and mating.

Desexing cats reduces these behaviours, thereby reducing the spread or contraction of FIV. There is a vaccine, however it is unknown how fully it protects.

It used to be thought that cats could become incontinent if desexed too young. This is not the case . The reality is most kittens can fall pregnant by 16 weeks of age which has a very negative affect on their health. Many vets will desex young kittens at 1.2kg. Ask your local rescue groups for recommendations of vets.

In the last few years we have seen the number of strays cats rise exponentially. This is in part due to how quickly cats breed, but we have also seen a huge rise in people dumping (often undesexed) cats on the streets. There are now so many stray cats (often friendly) and rescuers can no longer keep up. Kitten season is now so intense that pounds and rescues are often at capacity and can’t take in stray kittens or mums with babies.

CatRescue901 and other rescues are contacted on a daily basis to take in mums and babies and are often do not have space to take them.

If you let your cat have kittens don’t assume you will get help. NEVER give away kittens for free. It places them in danger. Some people disguise themselves as respectable, but feed kittens to snakes or use them to bait dogs or enjoy harming them. Also giving away undesexed kittens usually contributes to the over population problem when they start to breed.

The true cost of Desexing and not desexing

Desexing your pet is a basic and vital part of being a responsible pet owner. If you are experiencing financial difficulties there are organisations which have created subsidised desexing programmes to help you meet the costs involved. See ndn.org.au

If you don’t desex your cat and she has kittens, the ongoing costs of caring for the kittens and mum would out way the original cost of desexing.

The true cost of Desexing and not desexing

In some circumstances CatRescue may be able to assist with the cost of desexing a cat. Please go here for more information.

CatRescue 901: Their paws are in our hands.